Hello. How was your weekend? Mine was fine. On Saturday I went to Indus Valley for lunch, an Indian place just a couple of blocks from where I live. In almost 2 years of living in my neighborhood I never went, but now that is no longer the case, for I went, and it was good. For dinner I went to Meskerem, an Ethiopian restaurant that I've been to several times. It was good. 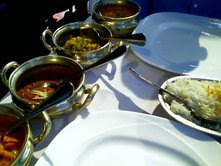 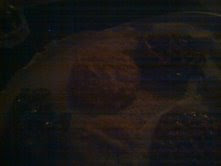 Meskerem - We ate in the dark

During the day on Saturday I played catch, which I documented in a previous post.

On Sunday I went to the Barnes & Noble on 82nd and Broadway, where I used to work, looking for a copy of 'I killed Adolf Hitler,' which I also mentioned in a previous post. Anyway, as luck would have it, they had a copy, and I quickly nabbed it and ran home to read it.

Let me just say, it was absolutely awesome. Seriously one of the best things I have ever read/looked at. I had a couple of misconceptions about it. First, the protagonist is not actually a government agent, but a private assasin-for-hire. Also, the time machine is able to work for more than one round-trip; however, it takes 50 years to re-charge it.

Anyway, you should go to wherever graphic novels are sold or rented, and you should buy it or rent it. 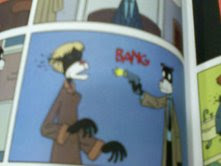 A scene from 'I killed Adolf Hitler' - as you can see, it's shockingly violent 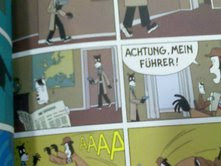