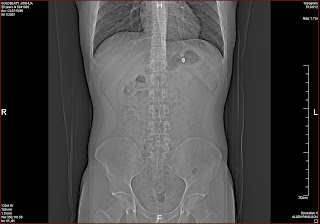 This is me - hello

We're coming up on the 1 year anniversary of the beginning of my health crisis. Since then I've been to quite a few doctors and have had quite a few tests. I've been told I'm fine. Well, I'm not so sure about that. Here is a rundown of some of the abnormal test results I've had, quoting from the actual pathology/radiology reports. Let me stress that I've had other abnormal findings, although I do not have the actual reports.

1) Abdominal/Pelvic CAT scan. "Probable benign lesion - there is a 1.5 cm lucency containing calcifications in the right intertrochanteric region which may represent a fibrous or cartilageous lesion."

Commentary: Oh, how lovely - probable/may represent. That does not sound very certain to me. Perhaps it represents a malignant lesion.

Commentary: A hypoplastic process? Hm. Follow-up and correlation with other information, e.g. endocrine disease or other chronic disorder? The doctor felt this was insignificant - easy for him to say!

In conclusion, as you can see, there are some issues here. My concern is that the imaging studies are revealing masses of leukemia cells. The bone marrow biopsy did not show leukemia; however, it did show that something is up, and my concern is that it's the early stages of a myeloid/lymphoid malignancy. As mentioned in an earlier post, I have these red patches on my skin, and I'm worried it may be aleukemic luekemia cutis, which does not manifest in the bone marrow right away. This would make sense given my bone marrow biopsy last May.