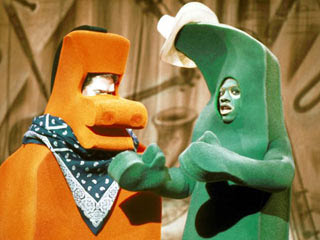 Anthony Bourdain is a food writer and former chef and also host of his own television show on Travel. He's also done stuff for Food Network. Anyway, he just goes all over the world sampling cuisine. I like him and he's a really good writer.

Anyway, he used to be the chef at Les Halles in New York, which I've never been to. So to get to the point, if there even is one, New York Magazine's food blog, Grub Street, has a post noting that Alan Richman, a food writer for GQ, recently panned Les Halles. Grub Street contacted Bourdain about this unsavory review and this is what Bourdain had to say: "It was like being mauled by Gumby. Afterwards, you’re not sure it even happened.”

First, if I were mauled by Gumby I would also have to question its reality.

Second, it's pretty wonderful that he made this analogy, and it reminded me of Eddie Murphy's Gumby, which was mentioned above. You may have thought, why is he bringing up Gumby? Now you now.

Third, I had a lot of links in this post.

Fourth, this post pretty much just sums up the Grub Street post, so perhaps I should have just linked to that.