I Leave the Cleanup to Dragnet

Hello. How was your weekend? Mine was fine, thank you. I happened to eat some Chinese food - for dinner on Saturday and lunch on Sunday. On Saturday I went to Spicy & Tasty in Flushing, the most wondrous Chinese restaurant in New York, or perhaps the world. On Sunday I went to Prosperity Dumpling and then had a run-in with some characters.

Let's take a look at some scenes from Spicy and Tasty...

On Sunday I went on a dumpling adventure to Manhattan's Chinatown. I ended up at Prosperity Dumpling, which has a menu very similar to Dumpling House, the famous haunt on Eldridge. Prosperity happens to be on Eldridge as well, a few blocks down. It is much less crowded, and the food is just as good, it seemed to me.

Let's take a look at this dumpling expedition...

Prosperity Dumpling - the place with the yellow awning up front

Do you see that bottle with the green top? I have the same thing in my apartment. 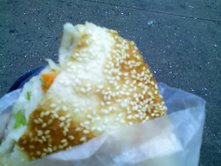 After my dumpling and sesame pancake with vegetable eating I walked around the hard streets of Chinatown. I got into an altercation with some 'hudlums' or 'gangsters' if you will. I commented that their pants were a little silly, and then they said something like, "East coast flavor, [people] who speak [poorly] get dealt with [not so slowly]" (certain words and phrases have been changed to make this suitable for general audiences). Anyway, it was a very serious and important altercation that ended with a slew of sawed-offs and hollow-points.