I am not sure what has happened, but recently I have become obsessed with Star Wars. Clearly, the prequels were disappointing and there's a hole in my soul that will forever remain empty. But still, the idea of Star Wars, particularly of the Force and the Jedi, is as poignant and powerful as ever.

There is just something so amazing about the whole Force mythology and the Way of the Jedi. I feel like, overall, this was botched in the prequels, although there were certainly moments of greatness (Darth Maul and his duel with Qui-Gong and Obi-Wan, for example). 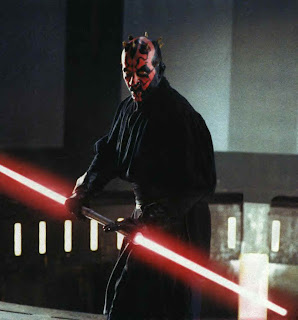 I have decided I must write a Star Wars Epic to address this void in my life. After all, if you want something done you have to do it yourself. I am currently researching, which entails pouring over electronic versions of the scripts for Episodes 1-6 and extracting all conversions dealing with the Force.

I am going to keep my story idea secret at this point, but I will give some tantalizing bits of information for all you who just can't wait.

1) It's tentatively entitled "Madness of the Force" (epic, right?)

3) There will be lots of lightsaber action, and also coronation of new Jedi in a powerful and epic ceremony

Please try to contain your excitement as you await my masterful epic!