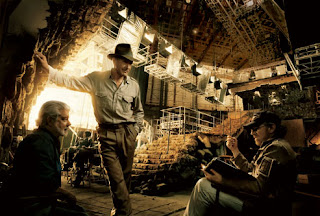 Please don't screw up yet another franchise, George!

The teaser trailer for the new Indiana Jones film is now online. It's a little worrisome to me, particularly some of the CG effects. I was also not a fan of the American flag at the beginning of the trailer - if it's an isolated thing in the movie, then fine, but I don't want Indiana Jones to be some patriotic cheerleading thing.

Anyway, I don't think it could hurt to lower expectations so as not to be overly disappointed. I have some faith in Speilberg, who is a very gifted filmmaker (although he has shown the tendency to make some poor choices in his more recent films). Lucas I have little to no faith in. He could very well be the undoing of the 4th Indiana Jones film.