No Rules, Just What Is Going On?

I went to Outback Steakhouse on 23rd Street a few days ago with two co-workers. One of these co-workers in particular had been craving a Bloomin' Onion (which was mistakingly referred to as a Blazin' Onion by one colleague, and something else hot or fire related by another colleague - perhaps Fiery Onion or Smokin' Onion, although I cannot remember).

Anyway, walking into Outback was very weird. It was like stepping into a wormhole and being instantly transported to another time and place. Immediately I felt like I was back home in Pittsburgh, where I had worked as a busboy at an Outback when I was 16.

While we ate our Burning Onion, I regalled my friends with tales of my service in the Outback busboy corps. One story is especially funny: I was asked to work a weekend night each week during the school year, and I obviously did not want to do this. I lied and told my boss that I played football for the high school team and therefore I would be playing games friday night and needed to have the other night to rest. My boss agreed to not make me work a weekend night, which I was thrilled about.

Anyway, when I was in high school I was a rather chubby fellow and not many people would have thought I played football, but my boss bought it (he was chubby, too, and perhaps he just wanted to think that chubby men could actually do something with their lives). Well, after a few weeks my boss decided to call a meeting of the busboys because he wanted to motivate us to do better. It was quite a touching and rousing speech he gave and to this day I am moved to tears when I think of it.

In the middle of the speech my boss said, "Josh, you play on the football team. What position do you play?" Now, several of my fellow busboys were friends and knew very well that I didn't play football, and I had neglected to tell them about my lie. They all looked at me with a "what the heck?" expression on their faces. One guy, who didn't really realize what was going on, said "Josh, you're not on the football team!" I gave him a deadly look and mouthed the words, "shut up, dude."

I was completely flushed and my heart was beating and I had a tingling sensation in my cheeks. To the question of which position I played, I replied, "um, safety." "Free or strong?" asked my boss. "Um, strong," I replied. Thankfully he didn't notice the disbelieving faces of my friends and, to my knowledge, it was never discovered that I didn't play football.

My colleagues were amused by my tale and we enjoyed our Whatever Onion and our meals. I must say, Outback has pretty solid food. That night, as I slept in my bed, I had a dream in which I was wearing a football uniform and am being chased and I don't know why. All of a sudden, my friend, the one who said, "Josh, you don't play football," is lying in my path and I trip over him. The man catches up to me and it's my former Outback boss and he's like, "Josh, you lied! You're fired!" To which I respond, "But I quit 8 years ago!" To which my old boss responds, "Oh." 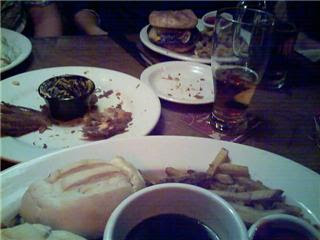 I ordered the prime rib sandwhich (forefront), and my one friend ordered a burger 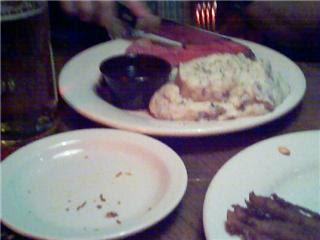