Well sadly, once again, I did not acquire proper documentation for yet another holiday potluck event. This time, however, it's probably for the best, as my skirt steak with chimichurri was a disaster.

Things started to go wrong when I did not get permission to take over the abandoned office and convert it into my grill room. I had assumed I would be able, since last time it wasn't a problem, but then again, last time my boss was out of the office on a business trip. Anyway, she was not thrilled with the idea of me using a spare room as a kitchen. I was sort of told there might not be anywhere I would be able to grill my meats. I thought I was just not going to be able to do it.

You see, the reason I wanted to grill my meats on the premises is obvious: freshness and funness. I thought it would be much better to bring in the marinated meats and cook them just a little while before the event began.

Anyway, it seemed like I wasn't going to be able to do that. I told everyone I would just take my meats home that night, grill them, and then bring them back the next day and we could reheat them in the microwave. People were actually very amenable to this idea, and, in retrospect, that's what I should have done. However, I am a stubborn man, particularly when it comes to meats, and so I found a way to grill my steaks.

I didn't know this, but my department had rented out a conference room for our gala, and this conference room has a balcony overlooking Amsterdam Avenue. I had my chance! I received permission to cook my meats outside on the balcony. I was ecstatic. But time was against me. There was only 15 minutes before the potluck began!

I quickly set up and began grilling, but by the time I finished, everyone had already eaten and there was very little interest in my meats. And the meat didn't even turn out that flavorful, even though it had been marinating overnight. It was ridiculously anti-climactic and disappointing - much like life, in general.

Dear Lord, I should have waited! I should have brought my meats home and grilled them slowly and carefully and tenderly. Dear Lord! 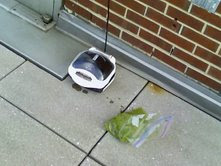 My lonely grill and a bag of marinated meats 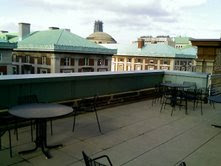 A fuller view of the cursed balcony 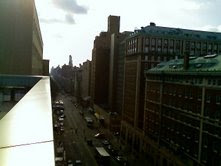 The view from the accursed balcony

Anyway, I don't have pictures of the finished product or the rest of the potluck lunch, but as I mentioned, this is probably for the best. If there is no evidence, it never happened, right? Of course, there were witnesses, but I doubt their testimony would stand up in a court of law.