For dinner last night I made chicken and Trader Joe's instant garlic mashed potatoes. The potatoes were supremely easy to make and really very good. The chicken I made wasn't bad. I used drumsticks because they're cheap. I browned them in olive oil and butter, then added onions, garlic, chicken stock and white wine. 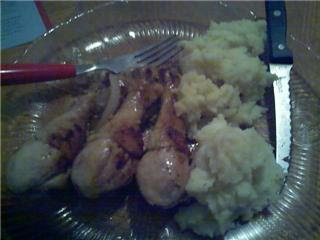 Later I went to the store to pick up some items. I bought Mallomars, the elusive and interesting treat. I first became aware of Mallomars from the Harrison Ford drama 'Regarding Henry,' in which Ford plays a high-powered attorney who is shot and later regains consciousness only to have lost his memory. One of the things he does retain from his pre-gunshot life is his love of Mallomars. With all due respect, it may have been better for Ford's career if he had been shot with an actual bullet, for he has made quite a few doozies recently (K19: The Widowmaker, 6 Days 7 Nights, Firewall, etc.). Anyway, I came home and ate some Mallomars and drank some white wine. It was on the pleasant side, especially considering that I had off the next day for elections. I'm not bothering to vote: I think it's for Assistant to the Deputy of the Advisor to the Comptroller. I am, however, strongly considering going on an adventure to Long Island, in which case I will report back later with my experience. 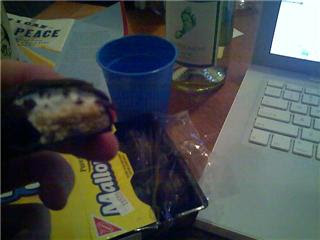