When it comes to Chinese food, for many years I really only cared about Sichuan food. To this day, I still find it to be the boldest, most intoxicating, and most alluring of the regional Oriental cuisines. Yet recently I've become interested in Cantonese, which, although perhaps more subtle and often times not as strongly flavored, is an intoxicating cuisine in its own right.

Two weeks ago, on a lovely Saturday evening, I traveled to Flushing to sample the Cantonese at Imperial Palace, which, according to a NY Times' review filed by Sam Sifton in 2009, was "riding high, at the zenith of Cantonese cooking in New York City." What better place to explore my new found fascination with Cantonese?

I had heard there can be healthy wait times at Imperial, and as I approached the Palace, small clusters of people stood on the sidewalk, a sign of a healthy wait time if ever there was one!.  As I was only eating with one other friend, though, our wait for a table was a relatively short 10 minutes or so.  The downside of this, of course, was that we were not be able to order a wide variety of dishes.

Dear friends, as mentioned, it has been a couple of weeks since I visited.  I know that you sit by your computers, breathlessly awaiting my reports, so I do apologize for the delay.  However, I shall do my best to accurately transcribe my impressions of the dishes we ordered.

Crab in garlic and ginger.  This dish was actually ordered in error: we meant to order the more well-known and praised sticky rice with crab.  The latter comes in a big metal steamer in which the rice has soaked up the juices of the crab.  What we ordered were whole crabs covered in a savory, clear sauce with scallions and garlic and ginger shrapnel (the best kind of shrapnel, in my opinion). The sauce was indeed delectable, but frankly, whole crab is messy and difficult to eat to begin with, and the sauce simply added to the confusion.  Sometimes the work is more trouble than it's worth, and I have to say this is how I felt.

Corn soup with minced chicken. This dish was ordered at the recommendation of Sam Sifton.  It has a very pleasing, velvety texture, and it was indeed pleasant, but it was also extremely mild.  As part of a larger feast with a greater variety of dishes and flavors, it may have been a welcome reprieve, but in our limited situation, it rather seemed like a waste of time.

Peking pork chops.  Essentially the "sweet and sour" chicken we've all sampled at countless Cantonese-American takeout places transferred to pork chops. According to Sifton, the dish "makes a mockery of the neon gloop you find in strip-mall versions of the dish." With all due respect to Sifton, please be quiet. Sure, the pork chops were expertly fried, and the sauce was in no way gloopy, but to say the dish makes a mockery of the strip mall versions is a bit of an overstatement. The Peking pork chops at Imperial are indeed better than your average sweet and sour concoctions, but not that much better.

I very much enjoyed the atmosphere at Imperial. Pretension doesn't exit there, and I found it comforting to be surrounded by "ordinary," non-hipster people enjoying dinner with their families on a Saturday night. The food was good, but given the limited samplings, further investigations are warranted before a final verdict can be reached. I shall have no problem fulfilling this duty. 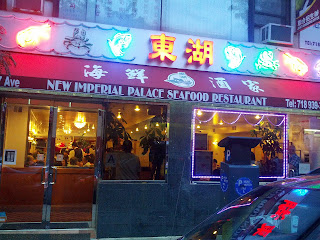 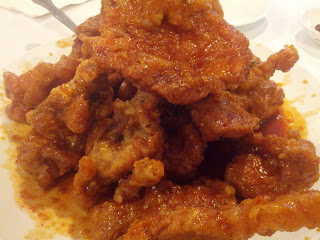 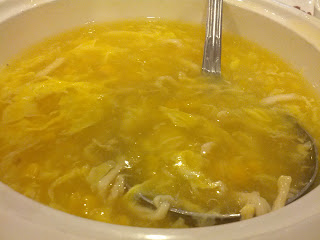 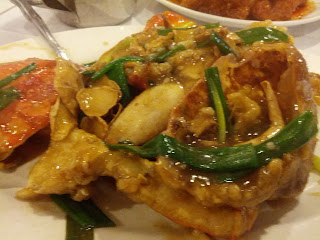