A Week of Meats - The Whole Pig Rises

It has been a week since I've chronicled my week of meats.  Last time, we discussed the meats I had on Wednesday.  The plan had been to eat meats Monday through Friday, which leaves Thursday and Friday to be discussed.

I will just come out and say it: I didn't have any Chinese roasted meats last Thursday.  Time would simply not permit.  Or, should I say, it would have been chronologically possible if not difficult, but I was rather tired of roasted meats and decided to take the easy way out.  So yes, I failed.

On Friday, though, I was back at it, this time traveling to Flushing.  Flushing is not known as a roasted meat mecca, but a friend of mine who is from China - yes, he is a real, live, Chinese man - recommended a place called Corner 28.  It was a bustling establishment and I was taken in with the energy and sheer Orientalism of it all.

So how were the meats?  All I sampled was the whole roast pig, and it was an all right whole roast pig, but it lacked the buttery, salty, crackly qualities of some of the finer establishments such as OK 218 Grand or Kim Tuong.

Anyhow, afterwards my Chinese friend and I ventured to the Golden Shopping Mall where I sampled my first pig ear.  It was chewy and rubbery and had a faintly putrid smell.

Thus concluded my (business) week of meats, minus one day in which I did not eat meats.  What I learned is: nothing. 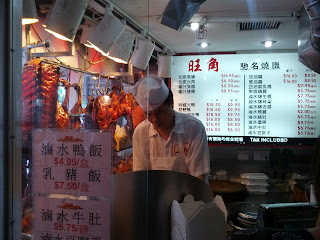 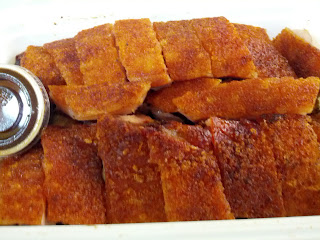 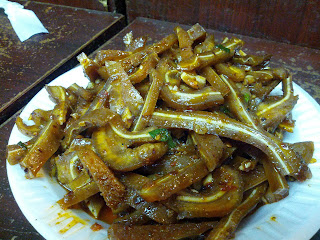