A few days before Wednesday, May 1, I had been wondering if the Times would ever review Cafe China, which is my current restaurant obsession. Then, on Wednesday, May 1, lo and behold, Pete Wells filed a review for said Cafe China, and I marveled at my uncanny intuition, which can only be deemed extraordinary.

I usually don't care very much about the ambience and decorative features of a place, but Cafe China quickly earned my admiration not only for the food - which I think is great - but also for the place itself, its vibe, its clientele, which is diverse and can include Chinese hipsters or senior citizens who are most assuredly not welcome in Williamsburg.  There is something about the Cafe China experience, food and place both, that I just love.

Last evening I dined at Cafe China for the third time.  I tried eating there last week, 2 days after the Times' review, and we were told it was not seating any more guests at 10pm, 30 minutes before the place was supposed to close.  Last night there was a bit of a wait, but we were able to eat, any conversation drowned out by the inordinate amounts of merrymaking taking place at a nearby huge table of Chinese quests.  Anyhow, I am glad Cafe China is busy, because it deserves to be, yet I miss the days when it was peppered with other patrons yet not overwhelmingly full.

Why I have become so taken with Sichuan I cannot say.  I could tell you "ma la," the combination of heat and numbness, is unlike anything most Westerners are used to.  I could tell you probably lots of things concerning the flavors and preparations.  I think, quite simply, Sichuan is the most exciting cuisine I've yet tasted, edging out even the best Indian and Thai I've sampled, which are amazingly complex and delicious cuisines. Of course, tomorrow, a switch will be flipped and I'll be into something else.  But right now it's Sichuan, and more specifically Cafe China. 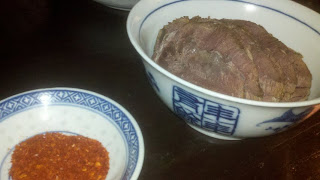 The five spice beef grew on me, but I have to say this was the most underwhelming dish I've had at Cafe China.  The beef is served cold and thinly sliced, and indeed has a taste of more than 4 but less than 6 spices.  A nice snack, but leaves you wanting more, which is perhaps the point. 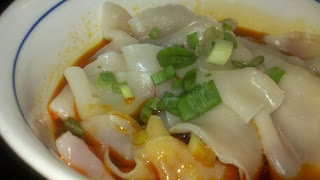 Pork dumplings in chili oil were savory, slippery little bastards.  This appetizer is amazingly savory.  The chili oil is a tempest of the highest order. 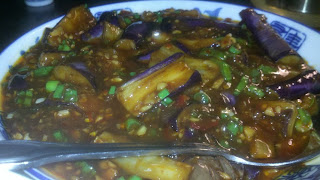 The eggplant in garlic sauce was similar to other versions I've had in other Sichuan restaurants.  The sauce is gloppy, unlike many Sichuan sauces and more reminiscent of takeout American Chinese in a certain way, yet no one can deny the absolute deliciousness of this dish.  The eggplant soaks up the savory garlic sweetness of the sauce to symphonic effect. 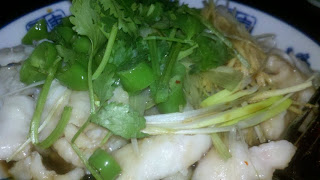 Fragrant fish, as it was called, was subtle and delicious.  Although it did contain green chili peppers, it was mild and delicate, the fish luxuriously soft and suffused with a mild taste of soy.  (is suffused a word?) 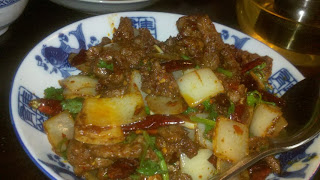 Spicy cumin lamb was rich with the taste of cumin, the onions a crunchy and sharp respite from the earthiness of the deep space.  Wonderful!

Somehow I forgot to take a picture of one last dish, called chungking spicy chicken.  Small cubes of chicken were stir fried with chili peppers to alarming effect.  A fine and addictive fried chicken.

My dining companions seemed to enjoy the food, although I detected a certain amount of disappointment, perhaps because I hyped the place up so much.  They affirmed their enjoyment, but I wonder if they were being polite.  Also, if they didn't like it as much as I did, what does this mean?  Am I for some reason deluding myself into liking Cafe China so much?  Or, more likely, do they have unrefined palates?  I shall go with the latter.