The Department of Eating Adventures

Han Joo, situated in a Korean strip of suburban Flushing, easily goes down as one of my best eating experiences in recent memory.

I had been wanting to try it for quite some time, having heard the tales of pork belly delight. On Saturday, April 28 2012, I assembled a crackerjack crew to take Han Joo by force.

Before departing for the rendezvous point, I decided it would be best to aclimatize to the Korean culture. I went to Caffe Bene, a Seoul-based chain which carries misugaru, an oaty liquid concoction of which several varieties are offered. I had the latte, and if you've ever hoped your daily bowl of cheerios could be transformed into a hot beverage, you're in luck.  It's strangely enjoyable and addictive.

Cheerios pumping through my veins, I knew it was time, and headed out to Flushing, where I met my team, a most capable unit consisting of demolition experts, master locksmiths, etc.  Once we surmounted the strong defenses, which consisted of a rather heavy wooden door you needed to push - not pull - we found the clientele to be predominantly Korean, with a few foodie hipsters thrown in.  The place was packed, bustling, and efficient, a veritable pork belly assembly line. 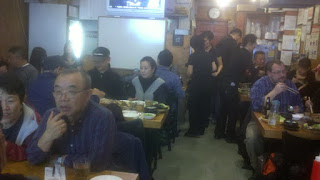 It is now that I come to the ineffable core of my story, my encounter with the divine.  How does one properly explain a symphony by Mozart, the movements, variations, notes, subtleties, power, drama, and interlaced tapestries of sound?  In the same way, how can one explain the combination pork belly platter at Han Joon? The various cuts with various marinations, the accompanying sauces, pickled vegetables, accoutrements, the endless possible combinations of flavors and textures, always with the rich, fatty excellence of the belly of a swine?

In short, you cannot properly explain it.  The best you can do is point to it, say "hey, it's over there, it's like this, but my description is not the thing itself nor can it truly emulate the experience unless you've already had it, in which case these words may remind you of the mystical moments."

I shall, therefore, briefly, outline the experience. A mysterious crystal slab (which they made an Indiana Jones film about) is brought before you and is heated.  Small dishes are amassed, including vegetable pancakes, pickled cucumbers, potato salad, vegetables in a dark red, spicy and sweet sauce, crab in a different yet also red, spicy and sweet sauce, and lettuce, which is used to create a taco of sorts.  There is also a rich, garlic and peanut-laden sauce which simply defies description. Quite simply it's delicious.

And then the merciful meat is unveiled, placed on the transcendent crystal slab.  Kimchi is also cooked.  The options you have for mixing and matching the various sauces and accoutrements is mind blowing.  Should you have the pork belly by itself?  Or dip it in simple sesame oil and salt and pepper? Or wrap it in lettuce with the savory peanut sauce, adding some julienned vegetables? As you eat, creating new combinations as you go, you slowly reach a rapturous ecstasy.  Later, when you return to reality, all you can think of is going back. 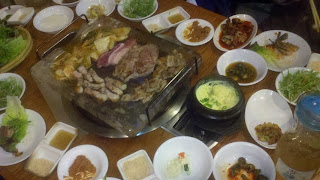