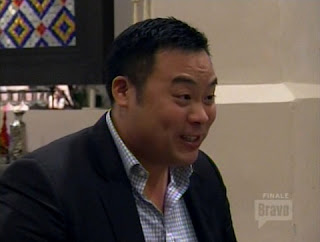 I never thought this blog would lead to my demise, at least not directly.  So imagine my surprise when I was kidnapped, blindfolded, taken to an undisclosed location, interrogated by David Chang and his evil henchman, Peter Meehan, and then summarily tortured and killed.  Yes, I was quite surprised.

Of course, this was in response to my recent log in the Annals of Chinese, in which I said I respected Momofuku but had never really been blown away by the food.  Well, now that I am dead, I might as well say that perhaps I really don't respect Momofuku.  Actually, in some ways it annoys me.  I don't understand all of the attention.  I mean, I guess I understand the attention - the food is pretty good, it's a humble idea that can be called "innovative," and a lot of attractive people go there.

Anyway, as I was saying, I was taken to an undisclosed location.  Given my nefarious background, I have quite a few enemies, so I wasn't at all surprised that I was being abducted.  Yet when my blindfold was taken off and I saw David Chang's face, I have to say, I was confused.

"You bastard," he said. "How dare you write so flippantly about my empire."

At this point, Peter Meehan, David Chang's not as personable groupie, arrived on the scene with a chainsaw, some chopsticks, and other devices. It seemed like an Asian Pulp Fiction.

"What do you have to say for yourself now?" asked Chang, with an evil smile.

"Really, the food is pretty good, but it's more the idea that critics love, and it's more you and your magnetic personality that has drawn so much attention," I said.

I do not wish to go into the details of my mutilation and murder.  Let's just say it was almost as disappointing as the Momofuku Ssam rotisserie duck, and leave it at that.