Why hello there. Please, pull up a seat.

First, a friend in "the field" sent me this report, or picture rather, of a gentleman walking down the street in Pittsburgh, in what can only be described as an unfortunate pair of pants...

I think my friend put it best: "There's not a god in the universe who's merciful or powerful enough to save a soul dressed like that."

On an unrelated note, last evening at around 9:30, although I had spent the day going on a great walk and having Shake Shack, I felt antsy and didn't feel like sitting around my apartment. And so I decided to take the 1 train down to South Ferry and then hop on the Staten Island Ferry for a boat ride. There weren't that many people on the ferry and I was standing on the port side, near the stern, looking out into the harbor. And then an older gentleman came and stood right next to me. Of all the places to stand, and there were many, he had to stand right next to me. I don't get it. Here is his picture. Watch out for this man if you're ever in a wide-open public space because chances are excellent he will stand right next to you. 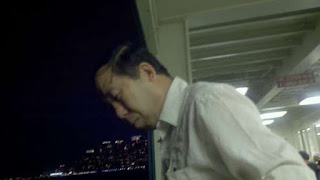 During my boat ride I thought about many things: the voyages of Captain James Cook, life, and waffles. I also thought it might be very cool to see how many consecutive trips you could take on the Staten Island Ferry. The main obstacle is that each time the boat reaches its destination either Staten Island or Manhattan, you are forced to exit and then re-board if you're interested in going back right away. That being the case, you would never be able to sleep for more than 25 minutes or so. Anyway, it would be an interesting endeavor.

Also, I was reading something yesterday that talked about how, if a rock could think, it might feel like it was in control of itself while it was falling through the air after being pushed off a ledge. Of course, you and I would both know that the rock was simply behaving according to immutable physical laws. The writer then went on to say humans are no different. We may feel like we are making choices, but really we are just rocks falling from a precipice in a completely prescribed way with the same fate as a rock, namely that we will crash into the ground.