A Drama of Cumin (and other spices) 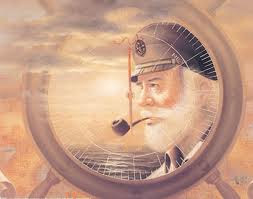 Ah, why yes, hello. Do come in. Oh no, you're not bothering me at all -- I was just examining some treasure maps. So, how are you? Oh good!

Ahem. Anyway, today I was at Strand bookstore in downtown Manhattan New York City, and I was delighted to learn that they have an entire section devoted to exploration. I decided to purchase a book called Over the Edge of the World: Magellan's Terrifying Circumnavigation of the Globe. I've already started reading said book, and the closing to the prologue reads as follows:

"They had survived an expedition to the ends of the earth, but more than that, they had endured a voyage into the darkest recesses of the human soul."

A voyage into the darkest recesses of the human soul. That's basically what this blog is. At any rate, it's hard to imagine this book will not be good. But, dear reader, I would actually like to direct your attention away from the pages of the book itself to the back cover. One of the reviews listed on the back, written by a certain Liz Smith, reads as follows:

"The drama of royal courts and kings, high seas, sinking ships, frightening natives, cannibalism, beriberi [note, I have no idea what "beriberi" even is], scurvy, mutiny, gold, and spices."

If I had been in charge of the back cover, I would have edited the blurb as follows:

Right there, that's all you really need to know that this is a must-read book. Also, in related news, I want to write an epic adventure novel called A Drama of Cumin (and other spices), about a sea captain, Captain Octavius Tushy, who is obsessed with cumin and voyages to the far reaches of the Delaware River in search of cumin (and other spices).