A Tale of Two Pizzas

Today after work I was going to go running. Then I caught this blurb on Slice, the noteworthy pizza blog, about the already cheap margherita pizza at Totale being slashed to a mere $5. After much soul searching I decided I needed to head downtown to get myself a pie. The life of a food blogger is difficult and full of sacrifice.

As it turns out, Totale, which I had visited once before and enjoyed, is just a few stores down from 2 Bros Pizza, a $1 slice place. It also turns out both places have the same owner. Clearly, I had no choice but to get the 12inch margherita from Totale and then a slice from 2 Bros to compare and contrast. 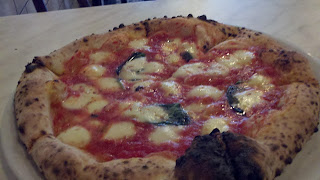 The margherita at Totale is good. Very good. It seems completely comparable to some of the noteworthy Neapolitan or "neo-Neapolitan" places in the city. It was a cool late-summer evening, the front of the store was opened up and it was breezy and comfortable. There were certainly people in the small shop, but it wasn't packed. There were many solo diners, like myself. And they were playing the Beatles. And this delicious pizza cost $5! 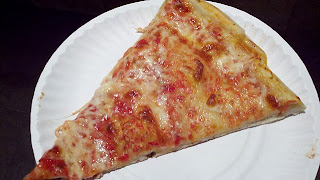 The slice at 2 Bros is not good. Not very good at all. Yes, it's edible. If you haven't eaten in 3 days and are on the verge of starvation, it would probably be better to eat it than to die. But then again, no one knows what comes after death, so it might be worth it to take your chances. Anyway, 2 Bros was uncomfortably hot due to the huge oven that's blasting out pizzas, assembly-line fashion. The several tables that existed were jammed packed. I believe they were playing rap music.

- I would recommend Totale.
- I wouldn't recommend 2 Bros unless you are very hungry and there are no alternatives.
- The life of a food blogger is difficult and full of sacrifice.