In the past, I have never taken people seriously when they claim to be so traumatized by finding large rocks in their bedrooms. Big deal, I thought. You found a rock in your room, life moves on, stop complaining. I was always convinced they were just being dramatic and seeking attention to make up for other insecurities.

Well, you live, you learn. Last night I was horrified to find a very large rock in my bedroom, next to my bookcase. 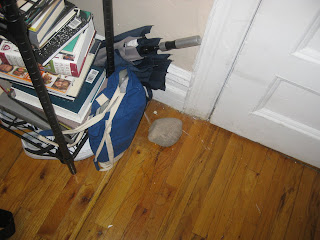 Exhibit A - a rock next to my bookcase 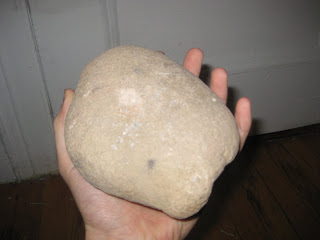 Many things run through your head when you find a rock in your bedroom, the first of which, at least for me, was how did it get there? Perhaps this says something about myself, but I immediately began to wonder if I was the one to place the rock in the room.

Perhaps I went on a hiking trip or something over the weekend, found a cool rock, decided to bring it home, and then forgot about it. However, after much retrospection, hypnosis, and the consumption of thousands of ginkoba supplements, I felt very certain that I was not the person who placed the rock in my room.

With that possibility most likely off the table, I had to consider another possibility: someone else placed the rock in my room. But who would do such a thing? Yes, I've made quite a few enemies in my day, yet in no way do I think that I have ever wronged someone so terribly as to merit an individual placing a large, circular rock in my living quarters.

A third possibility: it was an animal or insect, either with the purpose of upsetting me, or for other reasons intentional or not, who placed the rock in my room.

A fourth possibility: it was not an individual who placed the rock in my room, but rather some force of nature or cosmic power.

A fifth possibility: I imagined the whole thing. However, I did take pictures, and I did show the rock to my roommates, who did confirm its existence. Yet perhaps my roommates are also part of my imagination, as are the pictures I took, as is this whole blog, as is everything.

Anyway, as you can see - if in fact you even exist - this is a very troubling problem. I will never, ever, downplay someone's frustration at finding a rock in their room ever again.
Newer Post Older Post Home