Yesterday I headed out to DiFara Pizza to meet a friend who is sadly moving out of New York to a far inferior place (Boston). It was a really crappy Subway ride out there, it was hot and I had to stand the whole time and I didn't feel very well, so imagine my utter delight when I finally reached DiFara and saw the following sign: 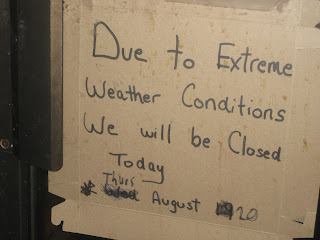 I was a little baffled as it was a perfectly sunny day, and by that time there was a breeze and it didn't feel ridiculously warm, but clearly, as was pointed out by a much wiser man, it was definitely kind of hot and humid for an older fellow to be manning a pizza oven.
Anyway, my friend and I got back on the subway and ventured back to Manhattan. On the train ride we discussed ancient Mayan civilization, the impending end of the world in 2012, and the CERN particle accelerator. Apparently there have been some technical issues with the accelerator, and we were wondering if indeed the world has in fact ended. This would explain, among other things, the closing of DiFara for "extreme weather."

Blah blah blah, we went to Artichoke and had a regular slice and an artichoke slice. I really wanted a square slice but it was going to take too long. I don't know, I don't think I can have another artichoke slice again and live to tell about it. As a friend once said, it's like "french onion soup on a pizza crust." 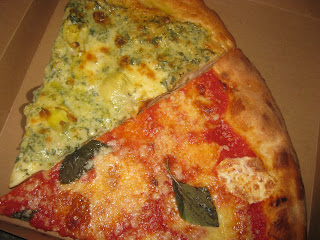 The artichoke slice on the left is an exercise in self-mutilation; the regular slice, on the other hand, is quite pleasant.
Newer Post Older Post Home