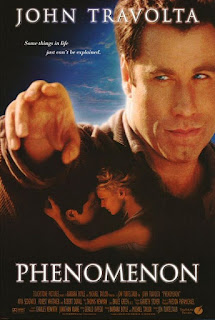 Yes, hello, and welcome to FAPPAF, the official blog of Phenomenon.

I first saw Phenomenon on video, a year or two after it was released in theaters. I don't remember the exact date, but what I do remember was seeing the film and knowing my life would never be the same.

Often, I would meet up with a good friend of mine at a local diner and talk about Phenomenon well into the night. Sometimes, we had dinner, talked all through the night about Phenomenon, and then ate breakfast the next morning at the same diner.

Well, one thing that always struck us was the ending, in which Travolta's character succumbs to his brain tumor. We always thought it was amazing that Travolta said "it's happening" right before he passes.

Here is the description of the scene given by Wikipedia...

"Later that day, George lays out a blanket in the shade of a tree, where he and Lace then lay down together to share a final emotional bond. Finally, George tells her "It's happening", indicating that his moment of death is imminent. With tears in her eyes, Lace lovingly embraces him as he quietly dies in her arms, giving him the peaceful death which he had hoped for."