For reasons too complicated to explain here, Dr. Brown's soda has been on my radar as of late. I actually don't even like any of the Dr. Brown's varieties, save for Root Beer. I particularly abhor the cream soda, which I feel is an abomination, whether it's made by IBC, A&W, whomever.

Yet I do like the name "Dr. Brown," and the cans are cool in an old-fashioned kind of way. Anyway, I thought it would be nice to start my own soda company with unique flavors. I have named my soda company Dr. Floppy's, because the man who invented the soda has really big, floppy ears, and his name is Dr. Floppy. 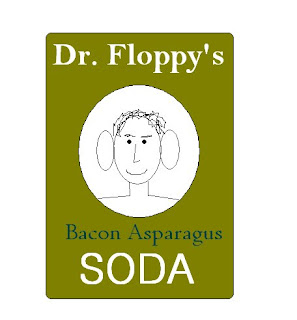 The first variety is "bacon asparagus." The can is very nicely designed and has a picture of Dr. Floppy. Expect many new flavors in the days, months and years to come.
Newer Post Older Post Home