Ollie's: The Most Authentic Chinese Food in New York? 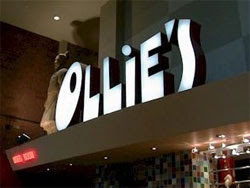 This is the place where real -- not pretend -- Chinese people go
Let's be honest here: Food & Pants is really about shaking up the order of things, questioning assumptions, and really just taking people out of their comfort zones and getting them to look at things in a different way.

Today I was sitting outside doing some reading, and this gentleman who appeared to be of the Asian persuasion put his stuff down at the table where I was sitting and proceeded to have a loud phone conversation. After he was finished he asked if he could sit down with me and eat his lunch. Since I didn't own the table, I didn't really feel comfortable telling him no, he couldn't sit with me, and so I gave my unnecessary consent. He took out his food and I noticed he was eating Chinese that appeared to be from Ollie's. I've always found Ollie's to be totally solid, although certainly nothing too too special.

After talking with this gentlemen for a bit, I was able to learn that he was from southern China. I asked how the food at Ollie's compared and he said Ollie's was better. What a blow to my elitist foodie view that Ollie's is 'Americanized' and that better and more 'authentic' Chinese is to be found at the whole-in-the-wall places in Flushing and Brooklyn and wherever.

Anyway, I'm going to start proclaiming Ollie's as the best, most truly authentic Chinese in New York, and I'm going to post a comment on Chowhound and all the foodies are going to start flocking to Ollie's from all over the Metro area, talking about how amazing and authentic it is (e.g. "it's really a complete misconception that General Tso's is not a real Chinese dish" or "criticizing Sesame Chicken was really just a postmodern, revisionist liberal conceit.')
Newer Post Older Post Home