*Update* In response to some comments I've received, I just want to say that the following incident is completely true. There were actually two people doing martial arts training on a certain college campus in the Northeast, and the dialogue is also completely true. It's all true!

Apparently, martial arts training is becoming very hip on college campuses. I mean literally on college campuses, as in the master and student will train on the campus quad. I witnessed this for myself just hours ago. Unfortunately, I was not able to get many pictures, but I did get this one... 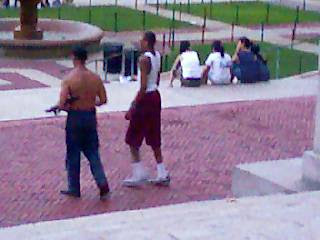 The guy on the left (without a shirt) is the teacher, while the fellow on the right (with the overly long shorts) is the student
I must say, this teacher was very hard on his pupil and really demanded total dedication. They started out practicing various defensive positions, and later did push-ups using the steps, so that the feet were placed on a higher elevation. They concluded with a game of frisbee, which really increases agility.

At one point in the training, the master said the following: "You're still growing, so we need to pay attention to your posture. If we don't you're going to end up being funny looking." Sounds like a great teacher to me.

Anyway, look out for people training in the martial arts at a college campus near you.
Newer Post Older Post Home