In my previous post, I discussed Roger Ebert's review of Raiders of the Lost Ark. Despite that rather eccentric line I explained in the last post, there was one line I particularly enjoyed...

It's actually more than a movie; it's a catalog of adventure.

A catalog of adventure, eh? I got to thinking, there should actually be a printed catalog of adventure. You should be able to leaf through it and get ideas for adventures you can have. I am pleased to announce I am working on such a catalog, which will be called "J.Adventure."

Here are some highlights.... 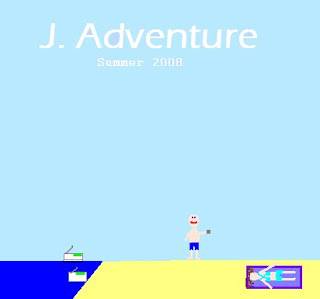 1) As per the cover, a great adventure is to go to the beach, find someone who is sleeping and has an Ipod conspicuously displayed, and snatch said Ipod. You can pretend (or not pretend) that the Ipod is a "transmitter for speaking with god." Then, when you're at a safe distance, you can throw a pebble or seashell at the person and let him or her know that you've stolen the Ipod. A thrilling chase will then ensue. It would not be a bad idea to have a waverunner docked nearby. If you want even more adventure, have a spare waverunner standing by so that the victim can get on and continue the pursuit.

2) Go to a crowded area, preferably urban, preferably in Cairo. Have a friend swing a sword around (I recommend plastic so that you don't accidentally get hurt). After a few moments, take out a pistol (I recommend a six-shooter to give the whole adventure a more old-fashioned feel) and proceed to shoot your friend dead.

That's it for now. Please feel free to post some suggestions.