Yes, hello. Yesterday I went to Best Buy and purchased Jaws, Indiana Jones and Raiders of the Lost Ark, Star Wars: A New Hope, and The Empire Strikes Back. I had been reading a book about the making of Indiana Jones and I got into a Spielberg/Lucas kick.

Anyway, as I was walking back to my apartment at around 2:30 I realized I left my keys in my room. I have 3 roommates. One hasn't moved in yet. One is in London. The other was at a wedding and would not return until late. This was bad. Or was it?

There is a little balcony thing outside the bedroom of the currently empty room. I knew the window was unlocked. Now, this balcony also extends to the bedroom of our next door neighbor's apartment. I thought, if they are home, I can ask to go out their window onto the balcony and sneak into my own apartment! 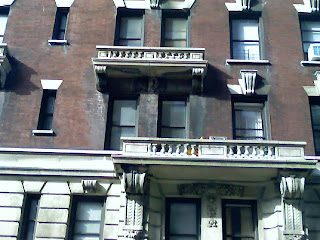 The two windows on the left are part of my apartment; the window on the right belongs to the neighbor

Thankfully, my neighbors were home, and they generously allowed me into their apartment. I got out onto the balcony, but unfortunately, the window in our apartment that opens directly onto the balcony was locked! This meant that I had to step off the balcony onto the ledge to get into the second window, which was unlocked. I took a few deep breaths and decided to go for it! 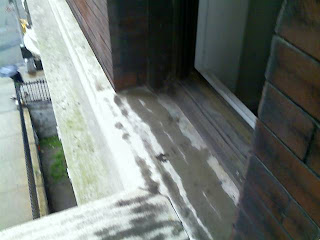 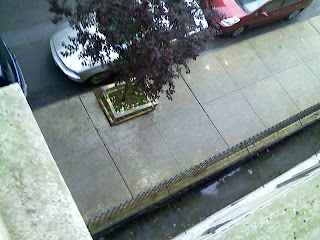 Well, since I am sitting here writing this the next day, you can safely assume that I made it, and indeed I did. I suppose it's possible that I fell to my death and I am currently in Sixth Sense mode, but I sort of doubt it.
Newer Post Older Post Home