Madness of the Force completed! 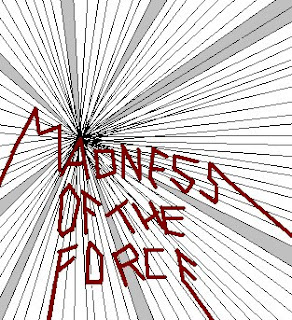 I have finally finished my Jedi epic, Madness of the Force. I am publishing my epic on this website for my readers. It'll be available in bookstores soon. It is, quite frankly, the greatest Jedi epic in history. The names of the characters are really awesome and the action is truly epic.

The Force was not always this way. Nor were the Jedi or the Sith. Once there was balance and these distinctions of light and dark, Jedi and Sith, were meaningless.

I, Verse Tetris, began my training long ago on the planet of Shimba-Lun. Though you may think that the Jedi got their start on Coruscant, where that pitiful temple resides, the Jedi actually began on Shimba-Lun, although this is not where knowledge of the Force began.

No, knowledge of the force began on Degobah, that remote swamp planet. It is said that a man named Grebbit Todd was sitting in meditation when he felt the presence of an all-pervading force. Almost as soon as it came, the presence of the Force disappeared and Todd spent years trying to feel it once more. He never did feel it again but he told his son, Dooby Todd, who also spent years in meditation, and slowly Dooby gained knowledge of the Force.

Dooby was a physically imposing figure, extremely tall and with very large muscles. He quickly learned how to pick up objects using the force.