I was expecting to go on my Coney Island Adventure on Saturday. I woke up feeling tired and unmotivated. Also, the weather didn't seem very nice. I was like, forget it. I did end up going for a nice walk down Riverside Park along the Hudson, and it actually ended up being fairly nice out. But I thought I would have to just forget about the walk to Coney Island until the next weekend.

On Sunday I woke up and I was feeling energetic and bold. It looked a bit cloudy outside, but I checked the weather reports and they were saying it was going to be a pretty nice day. Because I felt so saucy I decided to go on my trek to Coney Island!

Here is the path I took:

I started at 11:20 and finished at 5:05. I walked a distance of 19.72 miles. I stopped in Brooklyn at the mall-thing on Atlantic Avenue, where the Target is, to go to the Bathroom. I also stopped at a McDonald's later on to have a fountain diet soda. These stops amounted to about 15 minutes of down time.

Here are pictures I took every hour... 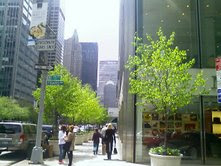 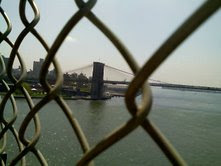 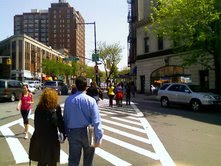 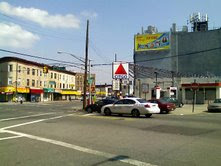 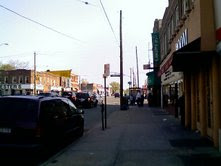 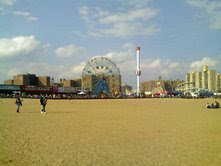 Anyway, it was delightful to finish my walk at the beach. I sat around for a while and got horribly sun-burned. I also went to Nathan's and had a hot dog. It is always my tradition when I go to the beach to put my hand in the water, so I did that as well.

This was a nice walk. The End. 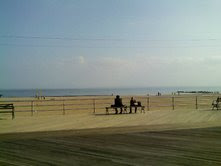