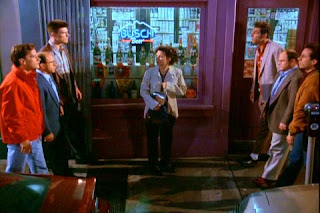 Something's happening here but you don't know what it is...do you, Mr. Jones?

Today I was sitting in my living room flipping through t.v. channels when I finally settled on Seinfeld (and I don't mean 'settled' in a pejorative sense, for Seinfeld is my second favorite show, right behind Lost).

Anyway, a friend called and said he was walking home and heard some guy say his neighborhood, Woodside, Queens, is like "bizarro world." My friend asked if I thought his neighborhood was a bizzaro world, and I said I had never thought that. I immediately thought of the bizzaro Seinfeld episode in which Elaine befriends three men who are the doppelgangers of Jerry, George and Kramer.

Anyway, it was a slightly unusual call, but whatever, these things happen. So I continue watching Seinfeld and I soon realize it's the bizzaro Seinfeld episode! How weird! My friend goes out of his way to call and say someone called his neighborhood bizarro, and bizarro Seinfeld just happens to be on, and I just happen to be watching it (I rarely watch television, other than Lost).

It was a freaky Twilight Zone moment and I began questioning reality but then I just ate my pork and broccoli and that was that.