So I got a haircut on Tuesday. 'Got a haircut' as in I received a cutting of my hair by a person other than myself. The last haircut I had was actually a self-haircut. I actually used scissors and everything - not clippers - to cut my own hair. It came out fairly decent - probably better than most haircuts I get.

I decided this time I needed to have it 'professionally' cut because, in all honesty, even though my hair looked fine after my self-haircut, it was horribly uneven. I told the stylist that I had cut my own hair after she had started and she gave a nod of recognition. She started to say something like, "now it makes sense," but she trailed off, perhaps not wanting to offend me. Well, none taken!

I have a long, co-dependent relationship with Supercuts, the hair styling chain. I can't say I've really ever had a haircut I've totally liked from them. In fact, the past couple of times I've gone, I've been so unhappy that I've gone to a different Supercuts to have it fixed!

This time I was going to go to a different place but it was closed - like, out of business, closed. I was scared and didn't know what to do and I felt like I really needed a haircut, so I instinctively gravitated towards Supercuts.

So anyway, I specifically told the stylist not to cut too much around the ears because my ears are rather large and funny. Quite frankly, my entire head is shaped in a funny manner. Because of this, I look rather ridiculous when my hair is short. If my hair is longer it helps to mask the absurd and laughable nature of my head.

Well, I don't know what happened, but the stylist took way too much off the sides and back, and therefore the embarassing shape of my head is noticeable by all. For the next few weeks I'm going to be totally miserable. 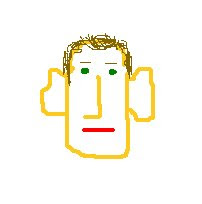 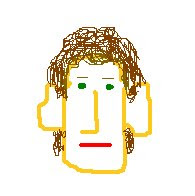 With longer hair I look a tad - just a tad - less silly. Still pretty silly, though.