Last week I made Cuban sandwiches for a holiday potluck party, and they were quite popular. I bought a foreman grill so I could press and toast the sandwiches to order. It was quite a hit and I was even given a raise by my boss.

Anyway, I need to do a post on these sandwiches, but I've been too busy because I am currently addicted to Lost, a show so fabulous that I can barely contain myself.

So after I'm done with the first season I may take a break for a day or two and do some updates before I begin season 2. In the meantime, I've been using my Foreman grill and last night I made meat (yes, meat, I will not get any more specific) and I also had some pierogies. 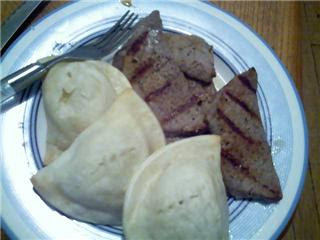