Am I My Brother's Keeper?

I was on the Subway yesterday and noticed a man wearing a despicable suit. Just abominable. I knew I needed to take a picture. The problem is that when you're in such tight quarters it is very easy for people to see that you're taking a picture.

More than once I tried getting a shot but the lady standing next to me kept looking at my phone when I opened it up. Finally she left, but then the man in the revolting suit took notice of me and I was worried he was going to know that I was taking a picture of him.

Imagine the awkwardness if he somehow saw that I did in fact take a picture. In all likelihood we'd just stand there and I'd want to die. Perhaps he'd say something like, 'Hey, why are you taking a picture of me?' To which I would reply, 'Um, I have a blog and I wanted to share how awful your suit is."

Anyway, I know that I'm serving a cause higher than myself so I decided to go for it and nab a picture. 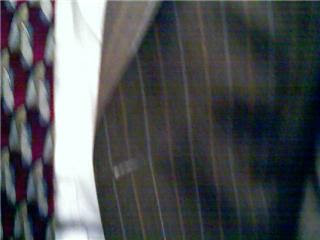 As you can see, this suit is just awful. First, it's brown. I mean, I don't think I can completely support a brown suit, but if it's solid brown, then ok, fine. However, this is a pinstripe brown suit, and not just normal pinstripes. The pinstrips alternate between a light blue and light orange color. Ew! Gross!

Never - EVER - wear pants that have blue and orange pinstripes, regardless of the background, brown, black, whatever.

I'll tell you, me seeing pants like the ones I saw yesterday is like when God realized Cain killed Abel. I am filled with anger and regret but also sadness. How could such a thing happen? I am more determined than ever to offer pant guidance to men so that what I saw yesterday never happens again.